I traveled in Vietnam around the New Year. In Huế, which was the capitol of Vietnam until 1945, there was a small mobile shoe repair stand on the street. In addition to the ubiquitous Vietnamese plastic stools, this cobbler had a small assortment of shoe repair tools laid out on a work-cloth.  I noticed the knife he was using was made out of a hacksaw blade, so I offered to purchase it. When traveling, I often like to try to purchase tools from people that are actually using them, so I can see how they are used in context and know that they work. He named what must have been an outrageous price, because when I accepted he nearly fell off his stool.  A few minutes after I left, I noticed he was quickly packing up his business, hopefully to take the day off and celebrate his big score. We were both extremely happy with this transaction. 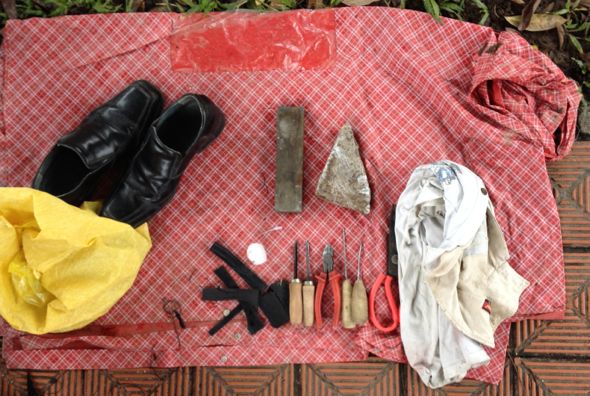 Tools from a shoe repair stand in Vietnam.

On the top row: pair of shoes, a coarse artificial and medium natural sharpening stone. On the bottom row: some rubber sole scraps, a white bottle containing some kind of adhesive, curved and angled gouges (for cutting channels into soles before sewing?), an angle nipper, a straight and bent awl, and scissors. The cloth is both a table and can be rolled up to transport the tools.

Knife made from a hacksaw blade that I purchased from the man in the above images. On the bottom the partially ground teeth that provide a pleasing grip.

The steel is fully hardened throughout, above HRC 65, and I assume M2 or M3 steel, but who knows. The top and bottom of blade itself is quite planar, in contrast to the Starrett blades I use, which are dished out in the center and take quite a bit of flattening. I’ve now seen knives made from hacksaw blades of Russian, English, Brazilian, Mexican, American, and Chinese origins. It is cool to find fully hardened hacksaw steel, formed by stock reduction, used as knives around the world. I use a M3 hacksaw English Style paring knife often in my own work. I like the balance of good edge retention at low angles, initial cutting performance and ease of resharpening.

A small amount of the teeth were left on the edge of the blade, giving a pleasing grip and visually reminiscent of file work found on high end European knives. There is a slight back bevel and the included blade bevel angle is 12 degrees. The back bevel might aid in the complex shapes—such as paring shoe soles. The blade angle is about 45 degrees. Although the blade itself was somewhat coarsely sharpened, it cut the rubber sole material quite easily when he demonstrated it. Overall, a basic, well made knife without superflous decoration or polishing.

I wasn’t able to find any knives like this in the local markets, so I’m curious if the cobbler made this himself or if there is a Vietnamese Jeff Peachey doppleganger who peddles them.

One Reply to “Vietnamese Hacksaw Knife for Shoe Repair”