Above is an example of blind stamping, using just water and the heat of the type to create the impression on a piece of vegetable tanned horsebutt leather.  The font is Edinburgh, brass type from P & S Engraving in the UK, the top line 14 point, the bottom two 10.  I’ve had these letters for 20 years, and the wear, especially on the “Y” in “PEACHEY” is evident- time to get some replacement letters!  This is the stamp on the blade cover for the new, A2 knives which has been cryogenically treated.  For more technical information about cryrogenic treatments check out nitrofreeze. Please read more about the new knives in  the new tools page on the right, and the results of testing in the post below which convinced me to use this new steel for leather paring knives.

As the result of my own experience,  feedback from some of my colleagues, and the results of scientific testing, I’ve become convinced that A2 cryro and machine hacksaw blades (M2 or M3 steel) are the best steel types for bookbinding knives.  By best, I mean they offer what I consider an optimum balance of edge retention, initial sharpness, ease of resharpening and price for a leather paring knife.

Four leather paring knives were tested by Cutlery and Allied Trades Research Association (CARTA), located in Sheffield, England. The knives were tested for Edge Angle, Hardness, Initial Cutting Performance  and Cutting Edge Retention.  The steels tested were O1, A2, Machine hacksaw blade, and T15.  All the steels rated very good to excellent, overall.  O1 is a popular, standard knife steel, which I make many styles of knives out of, and it works very well on regular, vegetable tanned goat.  Machinery’s Handbook recommends it when extreme sharpness is required. A2 is a newer, high tech steel gaining favor among woodworkers, since it holds an edge longer than O1.    Most large woodworker blade suppliers make both O1 and A2 versions of plane blades, so there is some personal preference involved- do you like to spend a slightly longer time sharpening (A2) or sharpen more often (O1).  Some type of overall time analysis might be conducted, but I can’t imagine it would be very informative given the wide range of unique variables the affect knives in use and when resharpening.  Some bookbinders also use knives made from D2- but I find the high chromium content and coarse carbide structure (up to 50 microns!) make it cut poorly, more like stainless steel than a tool steel.  Fully hardened machine hacksaw blades are traditional metal (starting mid. 20th C.?) for bookbinders to make paring knives from, I assume since it can be purchased already hardened and shaped by stock reduction. Starrett told me their “Red Stripe” blades are made from M3 steel, and I have read the English Eclipse ones are made from M2.  T15 is a super expensive, very high tech steel that outperformed all the other blades, but the inital cost to me, and the number of grinding belts it ate up and time it took when shaping would result in a $750 knife, and  I doubt anyone would purchase a $750 knife.  And you would almost require a set of diamond stones to resharpen it.

I shaped and sharpened all of these knives by hand to a 13 degree angle.  I suspect it is one of the first times that these types of steel were tested at such low angles– at typical woodworking blade is usually 25+ degrees.  The blades were shaped on a 2 x 72″ Cootie Belt Grinder, progressing through US grits of 36, 100, 220, followed by hand sharpening on 3M microfinishing films of 40, 15, 5  microns, then stropped on vegetable tanned horsebutt with a .5 micron chromium oxide and finished by stropping on the flesh side of undressed vegetable tanned calfskin.  The sharpness was tested on a pack of test cards containing 5% silica for 60 cutting cycles, 50N test load and 50mm/sec. test speed.  CATRA has invented and sells many machines for sharpening and knife testing.

Although I was attempting a 13 degree angle, the edge angled measured between 14-16 degrees for all of the knives when measured with a laser goniometer.  I think this is the result of not being able to hold the knife angle consistently enough when sharpening and the result of stropping.  There also was a general tendency for the angles to be slightly more acute (.5- 1.5 degrees less) at the sides of the cutting edge as compared with the middle.  This is most likely the result of natural hand motion when sharpening, since I usually sharpen parallel to the cutting edge. I suspect if I was in the habit of sharpening perpendicular to the cutting edge, the edge angle would be even more obtuse.

Average from three testing points near the cutting edge in Rockwell C scale.

This is how “sharp” the knife is; how far it penetrated into the cards during the first three cutting strokes.

This is how long the edge lasted– ie. the ability for the edge to resist wear.  This is the cumulative depth of  60 cycles of cutting the test pack.

A2 is light blue

CONCLUSIONS. Initially, A2 has a slightly slower rate of dulling, which may be an advantage, but later in the test the Hacksaw slightly surpasses it.  The O1 seems to have a very constant, predictable rate of dulling- the graph is very smooth.  The T15 is incredible- even at the end it was still cutting quite deep, and each cut it still quite deep.  Since O1 is about 400, and A2 is about 600, does this mean A2 is 20% better?  Given all the complex variables in use, it is hard to accurately  observe.  As with most scientific testing, a primary conclusion is the need for more testing.  I would like to compare bevel angles at 2.5 degree increments, add a number of different types of steel, like some of the M and S tool steel classes, maybe some of the new high carbon stainless steels and instead of testing with a sample card containing silica, test actual tanned and tawed leather.  Also the pressure on the blade may be much more than is necessary (or possible) to pare leather, and the sawing motion of the testing machine is different than a more static blade motion that bookbinders use. 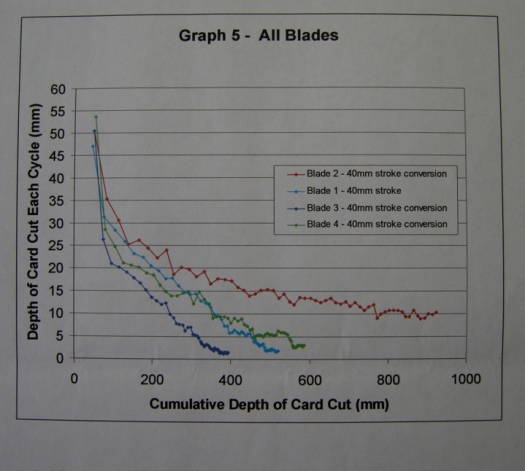 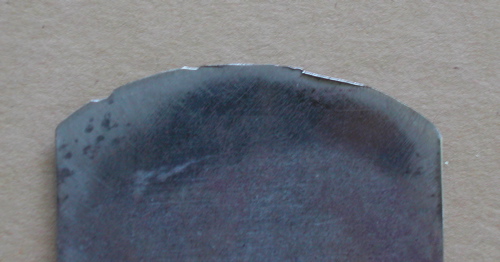 This is a great example of both sharpening problems and low quality steel. This photo is of the back of a curved leather paring knife. It is a bit difficult to see in the photo, but the darker, shiny area below the cutting edge has been highly polished. Unfortunately, our unnamed client,  let us call him Mr. B, neglected one of the first principals– feeling the burr. Once you feel a burr on a cutting edge, it means that the two planes (bevel and back of the knife) have gone past the point where they meet. As William Blake says in the Proverbs of Hell, “You never know what is enough unless you know more than enough.” The burr lets us know we have sharpened the edge more than enough, and can proceed to the next grit. A great deal of time was spent creating a polished area , that will not affect the cutting ability at all, and be instantly removed once someone attempts to regrind the knife.