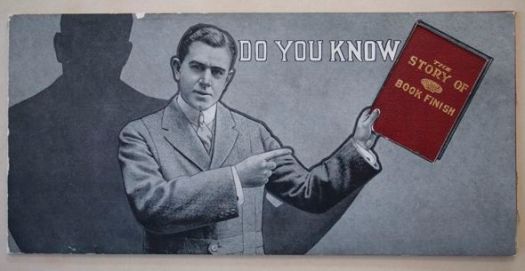 Fabrikoid Co. was one of the predominant American manufactures of artificial leather, incorporated in 1902 and purchased by Du Pont in 1910.  Du Pont managed to get Henry Ford to use it as the covering on his Model T in 1914, putting it on over 130,00 cars. It was used for upholstery and other applications. The book in the pamphlet above is actually made of Fabrikoid book finish artificial leather, and mounted behind the cover in a cut out, creating this striking image. The chiaroscuro figure, surreal shadow, and pointing finger create an ominous, almost accusatory impression. The story of book finish is serious stuff.

Another great advertising campaign was the “How Many Hides?” Since Fabrikoid was essentially a less nitrated- nitrocellulose dissolved in castor oil, alcohol, benzene and amyl acetate, which was called pyroxilin (py-ROX-i-lin), it could be applied to different substrates: cloth, paper, or leather splits.  Du Pont hoped to capitalize on emphasizing the artificiality of “genuine” leather, and also casually reminded readers that Fabrikoid  was much cheaper. Sets of books such as Colliers Encyclopedia and the Harvard Classics were often bound in Fabrikoid. There are literally hundreds of variations on color, substrate, and texture just in book cloths.