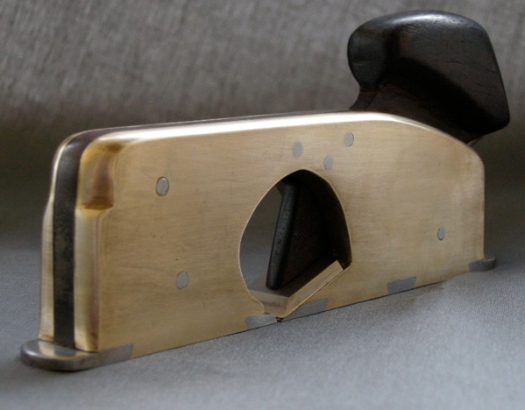 I made this shoulder plane a couple of years ago because I was too cheap to purchase a lee valley shoulder plane as an experiment.  I ended up making a set of different sizes, partly due to the thrill of rapid learning when you step out of your area of expertise.  Although it looks complex, it is only marginally more difficult than making a knife, since a plane is basically a jigged knife.  According to Salamon’s Dictionary of Woodworking Tools, shoulder planes appeared in the 19th century, and were only made of metal.  “Their purpose is to clean rebates, shoulders of tenons, etc. across the grain.”

This one is made up of a rosewood core, brass sides and a dovetailed steel sole and has a three quarter inch cutting width. The blade is advanced by tapping on it’s end, which is hidden under the handle in this image, and released by tapping on the back of the plane.  I made this only using hand tools- hacksaw, files, jeweler’s saw, tap and a drill.  The sides were tapped then threaded with 8/32 stainless steel rod.  I find metal dovetails almost easier to make than wood ones- the angle of the dovetail is 60 degrees, which is the same as a three sided file.  If you leave the pins and tails slightly proud, they can be hammered slightly to fill small gaps.  Since the bed of the plane can be easily filed, the fine tuning can take place after the sides are assembled.  I was trying to give it a streamlined Deco look, and it works great.