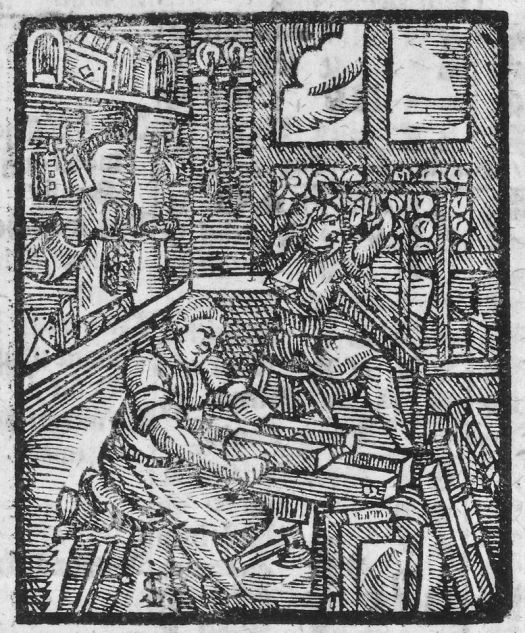 Jost Amman’s book of trades is iconic, or perhaps even a bit cliched depending on your point of view, and it is commonly used as a representation of  ‘hand-work’ irrespective of the time period under consideration.  The plates of Diderot are similarly used.  Yet these woodcuts, and an unknown number of copies made throughout the centuries, are important documents of technical aspects of many crafts. The illustration of the bookbinder, above, is from a 1723 calander,  the only edition and only copy located, according to Nina Musinsky. She describes this as “a crudely printed but appealing calendar/ almanac, illustrated with primitive wood-cut scenes of trades and professions. The printer Salomon appears to have conceived his Schreib-Kalender as a vehicle for the lively woodcuts, which may be the work of a single artist (IGS).” 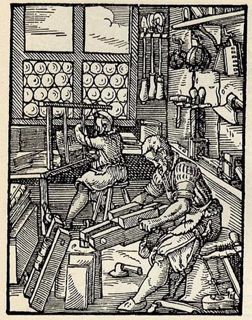 Often discrete changes contain valuable information: in this image, for example, the beating hammer looks like it is shaped like a double faced one, rather than the single faced style depicted in Amman’s original. Small details like these can help to help to date changes in tool styles. It also appears the sewing supports are wide tapes or thongs rather than cord?  Is the artist of this woodcut adding details from his own time rather than straightforwardly copying Amman?  It is often debatable if these details are oversights, reflections of contemporary practices and tools, mistakes, or simply crude renderings.

More broadly, the reuse of this image, 150 years after its creation, invites speculation about the long tradition of depicting hand work as archaic. As Tom Conroy mentions in his comments to the original post about this image, about half of the tools are for shaping wood boards, a binding style that was rarely used by the 1720’s.  Likely, this image would have already seemed old fashioned to a early 18th century audience. Yet the appeal — and the reuse —  of Amman’s illustrations continue.

Nina: many thanks for bringing this image to my attention and allowing it to be published.

PS. A calendar such as this would make a wonderful christmas gift for a certain NYC based book conservator with a keen interest in the history of bookbinding tools.