I’ve really enjoyed the discipline of writing a post roughly once a week, it has given me a chance to investigate and think about things that are slightly outside the usual scope of conservation discourse.  And it has helped improve, I think, both the speed and quality of my writing, which I hope will become manifest in some other projects.  Tags are a useful tool to organize and build on previous posts–hopefully they will lead to a larger, more coherent whole down the road.  A special thanks to all readers who have submitted comments; there are some valuable, original ideas expressed.

But there are some downsides to blogging.  I really dislike the quantification and statistical nature of the “dashboard”, but it is hard to ignore.  (FYI: This blog has had 19,761 visits, 60 posts, 118 comments and 7,840 rejected spam comments. The most popular post is the tool catalog, with 1,507 visits.)  It can easily become creating popularity for its own sake, as Lee Siegel points out in his book.  Even more distressing is Siegel’s observation that the web 2.0 is in some regards the apotheoses of capitalism– we have become the producers as well as the consumers.  And the plethora of information leads to powerlessness, not empowerment.  Since Communism has collapsed, and Capitalism is on the brink, Marx is becoming more and more appealing.  A great introduction are 13 video lectures by David Harvey,  distinguished professor at the City University of New York, which can be downloaded as video or audio podcasts, or streamed online.  Harvey  has taught Marx’s Capital Volume I for over 40 years– the breadth of his knowledge is amazing and the class is uncannily relevant to our current situation.

Siegel, Lee.  Against the Machine: Being Human in the Age of the Electronic Mob.  New York: Spiegel & Grau, 2008. 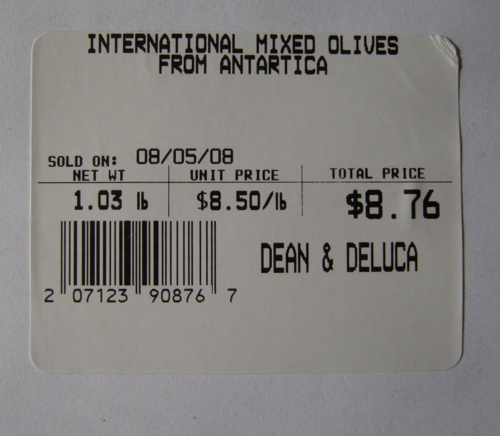 I was startled to read the label on a this tub of olives, purportedly from “Antartica”. They pair wonderfully with the baguettes I usually get from the North Pole, and I’m eagerly awaiting the first bottled water from Mars.