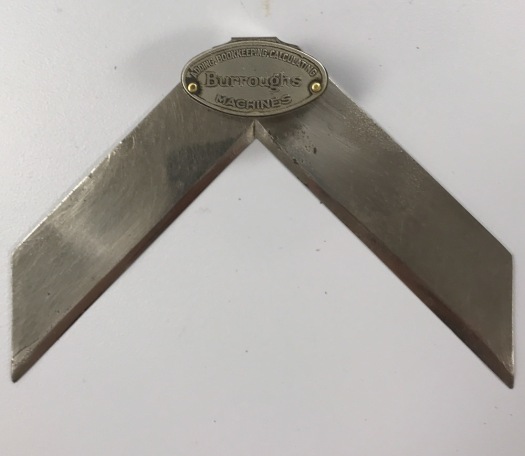 I’m hoping a reader can identify this unusual tool or jig.

The legs are about 3 inches long and 1 inch wide. The inner edge has a 45 degree bevel.  The medallion has a large “Burroughs” in the center,  “Adding, Bookkeeping, Calculating” on the top, and “Machines” on the bottom. The entire medallion is suspended on a bent piece of steel about .75 of an inch above the legs. Burroughs adding machines were quite popular in the early twentieth century, and the company was founded by beat writer William S. Burroughs’s grandfather.

Any guesses what is this device was for?

It has been almost a decade since my first two whatsit posts,  Whatsit #1 and #Whatsit #2. Number 2 was identified by Tom Conroy, #1 is still a bit of a mystery. For those unfamiliar with this colloquial American term, a “whatsit” is an unidentified object, short for “what is it”? The Mid-West Tool Collectors association often features a number of them in their quarterly publication, The Gristmill. You get a lot for your annual membership from them, including a reprint of a classic tool oriented book. The Early American Industries Association usually features a panel discussing a number of them in front of a live audience. Full bore geeky fun!

Recently a colleague has sent me images of a seriously odd, unidentified tool she found in her conservation lab.  She first thought it was some kind of cloth cutting tool, but it didn’t really work. This makes sense given the conically shaped brass end of it: a cloth cutter would have to have two steel blades. The shape of the handle indicates it is used by pushing forward, but I’ve never seen anything like it.

Here is a more detailed description of the business end. “The cone is not solid.  The brass sheet overlaps the wooden handle for about 1.25 in.  The cone is secured on the handle with two brass “pins” (visible in the photos, 1 pin on each side) onto the handle.  The blade-like part opens wider than is shown in the photo.  I can move it to a  90° angle with the cone.  When I open the blade fully and squint at the base of the blade, it looks as though the same pin(s) attaching the cone to the handle may also attach the blade to the handle.  Maybe it’s a single pin that runs all the way through.” She later mentioned the blade opens to almost 90 degrees.

The size of the brass end seems too large for bookbinding applications, my first guess is it is a type of gardening tool called a dibber or dibble.  Possibly the blade would aerate the soil or cut small roots??  It is odd how new the handle and brass cone looks when compared to the wear and discoloration on the blade.

But I’m not sure of any of this And why did it end up in an institutional book conservation lab? I’m stumped.

ADDED: Sept. 27, 2017. MYSTERY SOLVED!  John Nove, coment below, and in a personal email sent me the identification.  It is a  Humboldt Sharpener for Cork Borers.  Well done John! https://www.humboldtmfg.com/cork-borer-sharpener.html

I picked up this odd tool for $1.00.  I have no clue at all what it is for.  It feels very sturdy, and the metal that the shaft is made from is six sided like an allen key, and looks a bit like that metal as well, with a black coating.  The shaft runs through the handle and is attached to a washer at the end.  The regularity in manufacture suggests it was modified or pieced together from a manufactured tool and not owner made.  The dealer I bought it from thought the end was hammered flat from the tool, like a fishtail chisel, but to me it looks like there is almost too much metal on the flattened area for this to have happened. There are a few faint file marks on the sides of the flattened area, and the shape is a smooth curve.  I might use it as a back scratcher or fireplace poker, but would be very interested to find out what it really was for.

After looking at this some more, and playing around with it, I wonder if it is for stuffing a sofa or bed or something.

Looks like a stuffer to me too. My first thought was “golf ball,” then “horse collar.” It took a bushel of feathers to make one golf ball in the days before gutta-percha replaced “featheries.” Stuffing kits are sometimes shown in books on golf antiques, I think. For horse collar stuffers, I would start by trying Salaman’s “Encyclopedia of Leatherworking Tools.”

I looked, and there is a page of stuffers, mostly for horse collars.  There are some similar shapes, but all of the ones pictured have serrated tips, not smooth like this one.  I imagine the serrated tips would be important if you were trying to manipulate stuffing material.