In 18th C. France, what we now call a “bone” or “bone folder”, was called a “folding stick”.  The main purpose was to fold the printed sheets before collating, beating, saw-cutting and sewing.  Folding sticks are also mentioned a few other times for various purposes, including forming the headcap during covering.  Dudin devotes seven plates  and nine text pages describing the folding of everything from a folio to a 128mo. I haven’t had the patience to attempt to follow his written directions for folding, which could well serve as an application to MENSA.  It seems folding and headbanding are the two most difficult binding operations to communicate through writing and drawing. Below is an excerpted sample concerning the folding of a twenty-fourmo:

Later he notes that women either fold the sheets while sitting, with a card board on their knees, or on a table. This is interesting–it is the women, who work while seated, and use their knees, similar to the process of holding a book between their knees for headbanding. Elsewhere he mentions holding the headbanding press in one’s lap as well. These are the only references to using your knees that I can recall in bookbinding literature. I can’t think of any bookbinding procedures or conservation treatments where I use my knees today, except for kneeling to retrieve a book from a bottom shelf. 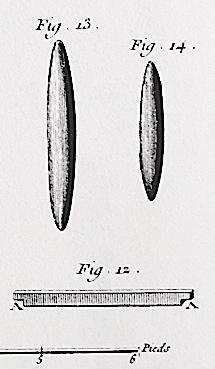 This illustration is a detail from Diderot, Plate I. The rule at the bottom is marked “Pieds”  (literally feet), so these folders are gargantuan, the smaller one roughly 16 inches long, and the larger one roughly 22 inches.  This seems a little difficult to believe, especially because they were used for general bookbinding operations as well as folding. The notes just describes them as “Grande & petit plioir.” (Big and little folding stick).    Elsewhere in this illustration a sewing table is pictured, so I think the scale refers to it, not the folding sticks.  If the illustration is to be believed, the big folding stick would be as tall as the uprights on the sewing table.  NB: The piece of wood under the folders is a spacer that fits into the slot on the sewing table to keep the cords from moving around in the large slot.

The folder Dudin pictures, in plate IX, is more like we are accustomed to, smaller in overall length (about 5 inches?), and I believe pointed on one end and rounded on the other.  In the text he describes it as 6-10 inches long, one and a half inches wide, tapered at both ends, one-sixth of an inch thick in the center and one-twelfth of an inch at the ends.  French folding sticks were made from “ordinary wood, ivory, yew, or tortoise-shell” (Dudin 1977, 4)

I knew who to call to make a reproduction of this– Jim Croft.  He is perhaps the most experienced folder maker in the universe, loves yew, and is a fantastic craftsman.  He sells elk, bison and deer folders direct, and also through TALAS. 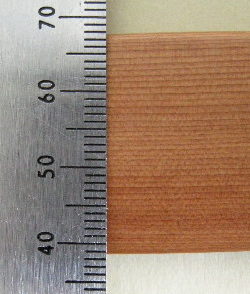 Jim made me this beautiful yew wood folder, faithfully following the contemporary descriptions provided by Dudin and Diderot. Idaho has some slow growing trees, and this was no exception.  Each growth ring is less than a millimeter.  I counted between 45-50 in the center section.  Jim also air dries all his wood, so it is more dimensionally stable than kiln dried wood.  The oldest tree is Europe is the Fortingall Yew in Scotland, and the oldest known wooden implement is a yew spear, about 50,000 years old.  Traditionally bows were made from yew.

At first I was worried that the color of the wood might somehow transfer to what I was folding, but that didn’t happen.  I like the lightness and the softness of the wood as compared to bone for some applications– it seems less likely to damage soft paper, for example.  The symmetrical shape makes it easy to pick up and use without having to check which end is which.  It is slightly wider than most bone folders, which makes it more comfortable when folding for extended time periods. The cross-section is symmetrical and fairly flat, again, I found it useful for general smoothing as well as folding.

When making historical models, I always find it interesting, if possible, to also use actual or reproduction tools from the time period.  It brings us one step closer to recreating not only the book, but the experience of making the book.  Tools have a direct impact in determining the final form that the book takes, and also influence us in the crafting of that book.