Using bone to make tools is likely very early in human history, maybe just after the rock and the stick.  Bone folders are still very common today in several trades, mainly because a better synthetic substitute has not been found, much to the dismay of hard-core vegetarians. Wood, bamboo, teflon, carbon fiber, steel, and a few other plastics are useful for specific tasks, however are not as useful overall.  Bone as a material is so ancient, traditional, simple and perfect it is hard to imagine any way to improve it.

Around 1889, J.C. Forman of Cleveland, Ohio, wanted a harder, less breakable bone folder and thought an aluminum alloy might be the answer.

The patent specifies that the tool is made from “aluminum metal in alloy thereof, having the required degree of weight, strength, hardness, and as best adapted to resist the oxidating influence to which it is subjected in its use. These essential properties are required in the article for the purpose above mentioned, to prevent the paper and binding of books from being discolored and injured by a metallic oxide.”  The patent later mentions the tool is useful for rubbing signatures down between bands, tapping down band-points (?) and creating an even swell.  It is touted as especially useful for blank account-books because of the strength of the material and its hardness. Although the patent drawing has a complex tapered shape, the image of the folder in the advertisement below seems to be simpler, with an essentially flat surface along the length. The semicircular shape of the rounded end is similar to a modern tongue depressor. According to an unverified wikipedia link, both wood and metal tongue depressors were available in 1865, though I haven’t seen an image of one. 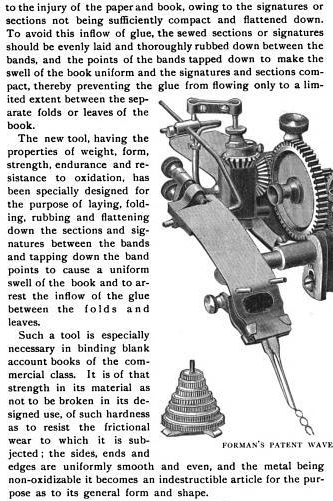 Since I was unable to find an example of this tool, I decided to make a replica. I first used 6061 aluminum and copied the dimensions mentioned in the Bookmaker article. Forman variously refers to the metal as aluminum, aluminum bronze, or “aluminum metal in alloy”. 6061 aluminum alloy, however, caused black skid marks on the paper when rubbed.  It also was much lighter than described.  This is a case where a description of the color of the metal would give us a much clearer idea of the metal. I also thought aluminum might have had a certain luxury appeal at the time, since it recently become a “non-precious” metal, plumenting in price from over $500 a pound in the mid nineteenth century (it was used for jewelry) to $2.00 a pound at the end.  In 1884, an once of aluminum cost $1, about the same as an average day laborer’s salary. It was Andrew Mellon (the Mellon foundation is well know today for its generous funding of conservation activities) who founded the aluminum monopoly which later became Alcoa, beginning in 1888. 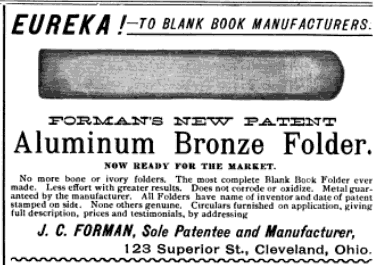 The American Bookmaker, Vol. 8, May, 1889. p. xi. Forman implies there were already knock-offs of his design being made and sold. Note the dubious claim “Less effort with greater results”. Note the puzzling claim “The most complete Blank Book Folder ever made.”

Next, I experimented with some aluminum bronze alloys, specifically types 954, 655 and 642. All these alloys are basically brass with around 10% aluminum, 3% iron, and varying trace amounts of manganese, nickel and cobalt. They were surprisingly difficult to work by stock reduction, which made me curious about the edge retention of an axe or cutting tool made from one of these alloys. I’ll put it on my list…. The 642 seemed closest to the “aluminum bronze” mentioned in Forman’s advertisement in terms of composition, weight and the fact that it barely marked the paper when rubbed vigorously. Forman, however, claims his metal alloy did not make a mark. Did I have the wrong alloy or was Forman exaggerating the qualities of his folder? I wonder if this small amount of offsetting might have been unnoticed or acceptable to late nineteenth century stationary binders. Possibly there are marks to look for along the spine edge of account books from around this time, if the folder was in fact adopted by some binders?

The American Bookmaker, Vol. 8, May, 1889, p. 124. This image seems to indicate a flat, rather than tapered shape for the majority of the folder, unlike the patent drawing.

Some kind of surface coating might mitigate this to an acceptable degree, but Forman doesn’t mention any. A thin coating of wax virtually eliminated the offset, though wears off quickly and itself offsets onto the paper. Possibly the heaviness of the folder was unpopular, it is roughly 2-3 times heavier than teflon or bone— 8.25 ounces (234 grams) for the replica I made, which is consistant what Forman reports.  Forman also mentions using this folder to tap, rather than rub, which solves the offset problem.

In the end, I really couldn’t find many advantages, besides the touted durability and unbreakability. Foreman’s patent is referenced by a 1965 claim by Hunt Manufacturing, but the base of this baren is made of teflon or similar material.  Bookmakers does sell a stainless steel folder, which they market as a “creaser”, and I think it is meant for scoring paper, not the traditional meaning of a “creaser” which is used to make blind lines on leather.

Here the trail runs cold. Did Forman discover an aluminum alloy—or coating—that didn’t mark paper when used, as he claims?   Were these folders used by binders?  Are there any examples of these folders around? Moving forward, might there be other materials used to create a better bone folder? What would need improving? 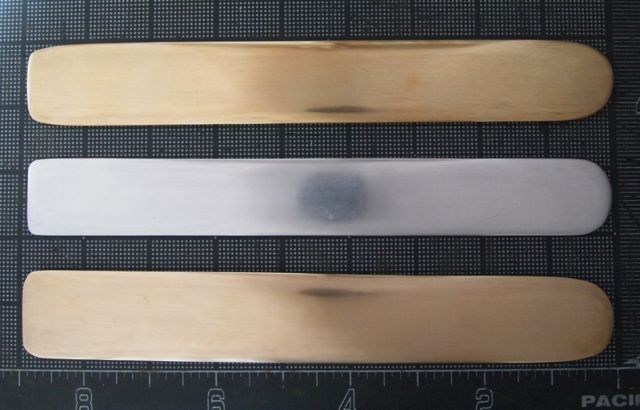 Three copies of Forman’s folder I’ve made: On the top 360 Brass, in the middle 6061 Aluminum, and on the bottom aluminum bronze.

2 Replies to “The Excelsior Metal Folder”