For reasons unknown to me, there are a number of these late 18th C. French bindings that have been converted into smuggler’s bibles.  The stamping on the front cover was done at a later date, and the inside of the textblock seems to have been edge glued, and the back flyleaf used to line the edges.  The bottom is the back board pastedown.  I always wonder what happened to the bulk of the text– thrown away or burned, most likely.

So if I am “reading” this book correctly, with little or no text, it is the materials and the structure of the binding that give it meaning.  In a way, this book is a eloquent example of how a conservator approaches a book.   Firstly, through the lens of the history of technology, it is the physical substrates that support and protect the text that are documented, analyzed and conserved.   Secondly, we have not time, interest  or are unable to read the language of most of the books we work on.  Do we even need the text?

But this book also demonstrates how the brutal alteration of an artifact can distort our understanding of history.   I’m very interested in late 18th C. French bookbinding, and even though there are many extant examples, each one that is lost  distorts our understanding of the total production and subtle workshop variations. It is that it is very difficult to determine when this book was altered, so it gives the unscrupulous an easy excuse of saying they bought the book in this condition.  The market currently values destroyed or altered books such as this more than an intact volume.

There is even a company called “Secret Storage Books” that currently makes new versions.  If I were being more stringent with my own ethics, I guess I shouldn’t have purchased this book, since it encourages more of them to be made.

Octave Uzanne, writing in 1904, in The French Bookbinders of the Eighteenth Century writes: “‘Sham books’, simple wooden boxes, and sometimes mere mouldings, covered with gauffered and gold-tool leathers, with which they filled the empty shelves of a pretentious library, or with which they garnished the doors.”  The books below, however are real books that have been made to resemble the sham books he talks about. 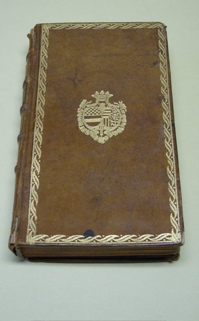 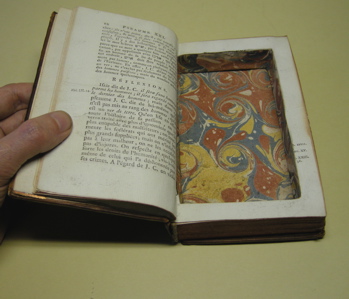 Jane Eagan kindly sent this image of a similar book she owns.

On the 24th of March, 2009 I was watching Looney Tunes historic Chuck Jones animation, and from 1939 an 8 minute short titled “Sniffles and the Bookworm” featured a smuggler’s bible.  Watch the book on the bottom right.  I barely had time to grab my camera, so I missed a better shot earlier in the movie. 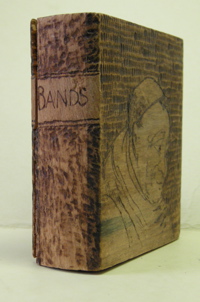 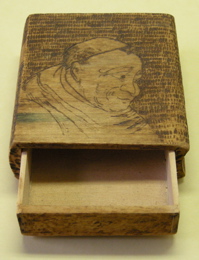 I picked this up at a second hand antique store in upstate NY. The bottom of the drawer says “FLEMISH / 725 / ..ART..” Perhaps it is tourist art? I’m not sure what the title “BANDS” refers to, or why there is a well executed monk on the front cover. The foreedge has a nice curve to it, and the burned and incised decoration covers the back cover as well. Looks like it might hold cigarettes? It is an odd little thing. 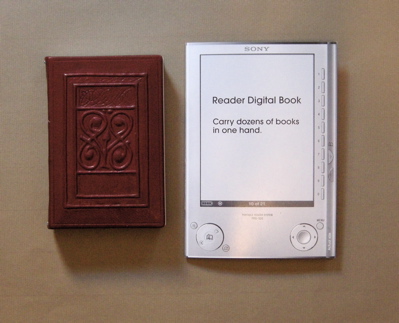 I am struck by how closely the dimensions of  the 7th century Stonyhurst Gospel (now renamed as St. Cuthbert’s Gospel of St. John) match the screen size of the Sony Portable Reader System PRS-505.  On the left is a model of the Gospel, which is described in the literature as being 134-138mm high, and 90-95mm wide (1:1.49).  The screen of the Sony Reader is 124mm high and 92mm wide (1:1.35).   Coincidence? Perhaps. But might their dimensions relate to our hand size or comfortable handheld viewing range?  These books are separated by 13 centuries!

I played with the Sony last weekend at the Small Press Fair in NYC. I was impressed by the resolution of the eink at any viewing angle, but page turns were agonizingly slow, and accompanied by an epeliptic inducing flash of background reversal– the text would go white, and the “page” black for a split second.  I also tried out a prototype of the next version, which has a touch screen interface, but doubt this would be a great advantage when reading.There is a promotion on now at Sony—  enter promo code:  10sonyclassic    You can get 10 free ebooks to read on your computer or ebook reader  from the “classics” collection– think 19th C. standard DWM’s.

I think the Stonyhurst needs a tagline too.  How about “The Stonyhurst: Carry the Gospel of St. John in one hand.”