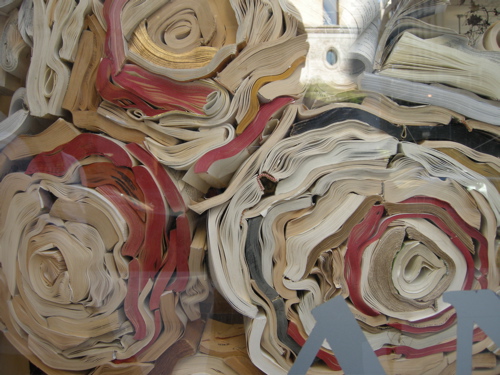 This is not an image of water damage, an art project or a disaster recovery workshop.  Instead, it is the current window dressing of the Anthropologie store located at 5th Ave. and 16th St. in New York City.  At least a couple of thousand books appear to have been opened 180 degrees, wetted, then rolled into these large cylinders, as if the books were returning to the trees from which they came.  This display could be interpreted as an incisive a comment on the relationship between advertising and narrative structure– even a non-functioning narrative (the destroyed book) is powerful enough to be co-opted by advertising. Maybe this display is a political statement on the torturing of physical objects, denying them of their own meaning, forcing them to deliver another message, in this case to sell items in the store. Most likely, however, the relationship between this display and the overpriced crap luxury consumer goods that this store retails wasn’t even considered.

I’m always a bit uneasy when I see books that have been mutilated, whether it is done in the name of art, censorship, vandalism, or commerce.  I would have given no pause to this window if it were filled with broken laptop computers or ebook readers, which indicates some fundamental differences between our relationship to virtual and “real” books.  It is a sign that book arts have entered the mainstream when designers adopt their techniques– part of the filtering of ideas from “high” art to popular culture.  I noticed  Brooklyn Public Library and Appleton Public Library (Wisconsin) stamps on some of the tail edges, but all libraries have to deaccession books. Is it better to do a surreptitious run to the landfill or recycling center, or should they “live a second life” as some might argue this display illustrates?

Many librarians subscribe to the broken windows theory — books that are poorly shelved and messy tend to encourage more disorder and damage.  And many conservators bemoan the thoughtless handling that many patrons (and sometimes curators!) display when handling a fragile, rare book with the careless aplomb more commonly observed at telephone booths–holding the telephone book precariously in one hand while inserting the change and dialing with the other, for example.

Although this display sets a horrifying example about how books can be handled and stored, what concerns me more is that it represents an insidious cultural trend — specifically a disregard for the physical substrates used to transmit and store information, and generally a de-privileging  (perhaps denial?) of human interaction with the physical world.

I recently inherited this wooden book shaped object, which belonged to my 5th Great- Uncle, Samuel Brillhart.  It has become my most treasured possession, representing a link between my current interests (the 18th Century, books and wood) with those of my ancestors.  This book is not a true xylotheque, which would also possibly contain seeds, leaves and other samples of the tree itself, instead it is a model or representation of a book. I think the wood is mahogany, which was being exported from Central America as early as the 17th. C.  The date, 1746, is also the date that Samuel built a church in York Co., PA.  I have a photograph of a drawing of the church, which looks to be a dovetailed log cabin style structure with two chimneys. Possibly the wood came from an alter in the Church?

I’m unclear how the writing was made, it appears to be burned onto the surface of the wood, instead of an ink that would sit more on the surface.   It measures 133 x 97 x 35 mm, giving it a more horizontal presence than many 18th C. books, and weighs 254 g. Under his name on the upper cover, there are three lines of writing, “The first/  xxxxxx   church/ York Co Pa”.

The wood is very smooth from handling, and the tear out on the head and tail suggest it was carved by a somewhat dull chisel.  The spine and foreedge are basically flat. The boards are fairly thick, around 5mm and the squares vary from 3-5mm. The top edge of the boards has parallel handsaw marks, and the tail edge is worn smooth.  I especially like the grain on the foreedge, which give a visual effect of edges of a page.

Why would my Uncle make this?  Why put the date on the spine and name on the cover? Most books sit quietly closed 99.99% of their lives: was this made to be a reminder to open and read “the book”? Is it a reminder of the power and appeal of the physical presence of the book, even a non functioning one?  What questions does it ask about the presumed function of “real” books?

Along one of the main streets in Istanbul, Divan Yolu Cad, I noticed an interesting book related public art project.  There were at least 12 of these open book benches, each with a different page open. I couldn’t read it, but from the layout it looked like a poem.  The benches were quite comfortable, so I had to wait quite a while until they were unoccupied to take these photos.