#1, a grattoir. I made this one based on an image in Diderot’s Encyclopedie. I think it should be all iron.

#2, a grattoir. I made this based on an image in Dudin’s Relieur. Traditional ones are iron and wood.

#3, a frottoir. Wood handle with iron. It resembles a fishtail chisel in profile and is similar to the older form of #2.

#6, a froittoir. I  based this one on models similar to #4 and #5 above. I use brass because I don’t want to risk rusting paper. It can be purchased in my shop.

#7, a froittoir. Looks vaguely German to me. It is very light. Generally, a German style frottoir is much thicker, and used perpendicularly to the spine-folds, rather than parallel, so I’m still searching for information about this one.

#8, a froittoir. Looks to mid-20th century to me, and is in clean, working condition. A great story accompanied this one via Jan Camps.   J and J Camps.  Jan relates that it was from the workshop Mr. Volkaerts, from Mechelen (a town in Flanders between Brussels and Antwerp). He studied bookbinding in La Cambre in Brussels. He got married, and for some reason his wife forbade him to start his own studio, instead he spent his whole life working a day job as a government official. In his spare time he bound books and managed to form a huge collection of gilding tools. After his death, his wife sold the books, stored away his machines and his collection of gilding tools. After she her heirs sold these boxes to Jan.

#9, a froittoir. Similar to #8 but older, much heavier, and much more comfortable to use. This could also be of German origin, Peter Verheyen mentioned to me it is called a called a Cachiereisen/ Cachier-Eisen /Kaschiereisen/Kaschier-Eisen.

#10, a froittoir. Old wood, wonderfully heavy and a great patina. This shape is very interesting to me, especially the offset “foot”. I would like to see how it is traditionally used.

#11, a froittoir. Heavy wood and beautiful curve. The presence on paint or stain on both #10 and #11 suggest they might have been used for leather marbling or edge sprinkling.

#13, a froittoir. I wondered if a smaller wood one could work as well as a iron one. It doesn’t. Based on a shape found in Dudin’s Relieur, though I think the original was iron.

#14, a froittoir. Currently sold by TALAS. I find it useless because the ends are too rounded and the handle is too straight to comfortably hold, and the pores in the wood absorb too much paste. However, a similar one is pictured in Edith Diehl’s 1946 Bookbinding: Its Background and Technique, p. 142.

Note: I acquired numbers 3, 4, 5, 7, 9, 10, 11 from J and J Camps in 2016. According to him, they originally belonged to Renatus De Cock, a binder in Mechelen. A biography of De Cock, in Dutch, but with pictures is here (http://www.boekbinderij-camps.be/content/files/111-229-engramzine-r-de-cock-af0cc7.pdf). De Cock studied bookbinding and gilding in Brussels at “Institut des Arts et Métiers de la Ville de Bruxelles”, his teacher was Louis Malcorps. De Cock bought some old workshops when he was a student and in the beginning of his career, the frottoirs/grattoirs where part of these workshops and likely date from around 1900 or earlier.

In 18th century French bookbinding, according to both Diderot and Dudin, these grattoirs (usually translated as scrapers) were used to aid in backing and smooth the spine linings. There were also frottoirs (versions with dents– pointed teeth) [*check comments for some discussion of these terms*] to scratch up the spine to get better adhesion, since book structures of this time period often had transverse vellum spine linings.  I made a wood copy of the tool above on the left, but the light weight and friction from the wood made it awkward and ineffective; the friction would tend to tear the spinefolds and dislodge spine linings. There is a contemporary version, available commercially, which is even more useless due to the extreme round on the ends.  I’m a little uncertain about these terms– so far the only reference I’ve found in English is in Diehl, where she refers to a wood frottoir ( burnisher?), that looks a lot like the one still available. 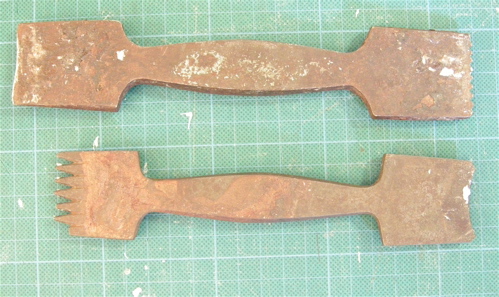 This summer,  I had a chance to test drive the combination frottoir/ grattoir tools pictured above. Ernst Rietzschel, from Holland, borrowed them from his bookbinding teacher in Belgium,  so it is likely they come from the French binding tradition.  Their weight, as well as the very slight curve,  made it easy to concentrate pressure on just a signature of two for accurate manipulation of the spine. As an unexpected benefit, it was wildly cathartic to punch and  scratch the spinefolds with the teeth, of course, only in the interests of historical research!

I used the smooth, slightly rounded ends of the original tool to back the book and to align the cords as well as to burnish the spine linings. Even with the damaged edges and paint, I was surprised how easy it was to gently control the backing process and tweak the cords into alignment.   I had much more control compared to using a hammer, and it was quicker (and potentially less damaging) than loading the spine with so much moisture that I could manipulate it with my fingers or a folder.

Originally, I was planning to reproduce the original, but I didn’t want to make it out of iron because it is prone to rust.  I wanted two smooth ends since I only scrape spines on specific historical models.  I considered stainless steel, but didn’t have any on hand, and it is very gummy and difficult to work by stock reduction.  Bronze was a good candidate, but brass is slightly harder.

So I made a modern interpretation out of  free machining, type 360 brass with a lignum vitae handles.  The quarter inch thick brass and heavy wood handles give it a weight similar to the original, although the aesthetics are quite different. My version is 1.5 inches wide, 8 inches long and weighs 9.4 oz. ( 4 cm wide, 20 long, and 266 grams) In practice it works just as well, in not better, than the original.  It can be grasped with a fist for extra pressure, or delicately held like a pencil for detailed manipulation.

I wonder why a tool this useful would become virtually extinct?

Fig. 3: A contemporary grattoir I designed and made.