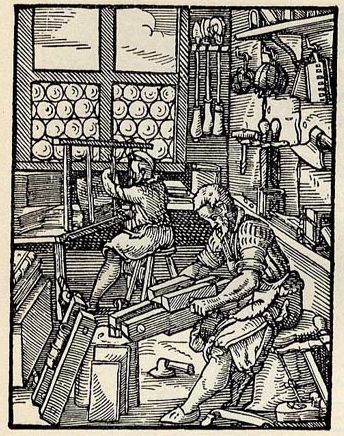 “Both lay and sacred, big and small,

Give me books: I bind them all

In parchment or in boards of wood.

And my clasps and locks look good.

I shape and cut the books for size,

And a stamp that beautifies,

And gild some spines, but just a few.

My income is quite handsome, too.”

Rabb, Theodore K. A Sixteenth-Century Book of Trades: Das Standebuch. (Palo Alto, CA: The Society for the Promotion of Science and Scholarship, 2009) 43.

Rabb’s introduction is fascinating. Jost Amman (1539-1591) was the son of a professor, moved to Nurenburg, and produced thousands of individual prints.   There are ten woodcuts relating to the book trade: the typefounder (the first depiction of one), the draughtsman, the gold beater, the parchment maker,  the tanner, the etcher, the papermaker, the printer, the illuminator, and the bookbinder. This book was groundbreaking in its straightforward description of crafts. The introduction concludes with some observations on German identity, craftsmanship, and Weber’s Protestant Ethic. There are striking similarities between the depiction of the goldbeater’s hammer and the beating hammer that the bookbinder is using — perhaps another early metal working and book making connection?