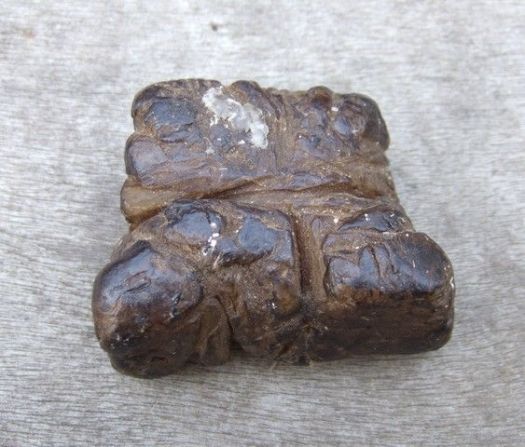 Any guesses what is pictured in the above image?

I’m really happy museums are collecting this kind of thing.

It is from the Maritime Heritage East, and it is a hunk of beeswax that sailors waxed their whipping cord with, much like traditional bookbinders do with sewing thread. Looking at this, I can see how someone pulled the thread through it, likely holding it in one hand between their thumb and forefinger and rotating it 90 degrees occasionally to prevent the thread from cutting through. In fact, the museum notes that Harold Scot, an orphan sailer, received this wax in 1933 when he was 16, and used it for the next 66 years. It is unusual to have this type of provenance concerning tools and craft materials.

So what? Why does this ugly hunk of beeswax matter? Because here we have a physical record of technique, seemingly frozen in time. We can interpret the technique from this object, and it is an interesting object because it is a material that acts like a tool. The thread is shaped the wax, somewhat like a potter’s rib shapes clay. It is difficult to know, from this isolated example, if this was a common technique or waxing thread, a local custom, or possibly novel.  It would be interesting to compare other examples of beeswax, possibly from other trades. Was this hand sized square of wax a common size?

We do know that using beeswax to prevent kinking and reducing abrasion of sewing thread was common in many trades, including bookbinding. Yet materials like this are not commonly passed on when a bindery is sold. The use of beeswax seems to be waning, because of concerns about acidity and the fact it is not really necessary if the needle is the right size, and the thread properly relaxed. In fact, the sewing thread of most early bindings I’ve examined does not seem to be waxed. 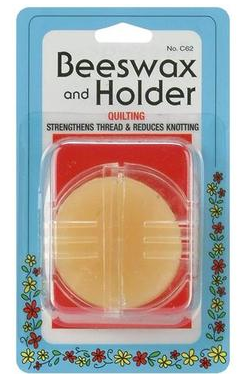 A 20th century “innovation” in beeswax is the plastic holder pictured above, which is marketed to bookbinders and other sewing related crafts and even sold at Walmart. I suspect that one motive was to sell more tiny disks of beeswax, and the holder encourages waste because only part of the wax can be used. To be fair, the holder does keep the beeswax and the workers hands clean. But unless you are very careful, it is easy to abrade the thread on the sharp plastic edges, in contrast to the advertising claim that this device “strengthens” the thread. What does the holder, with its regulated placement of the thread imply about the marketing and deskilling technique in modern craft? Is the holder akin to training wheels?

Since the history of craft technique is generally unwritten, it is the responsibility of craft practitioners and conservators to interpret—or at least preserve and draw awareness—to these physical traces of past technique.

4 Replies to “An Ugly Hunk”