Jan Camps, a bookbinder from Belgium, has this collection of polishing irons for sale. Please contact him directly  (info (AT) boekbinderij-camps(DOT)be) for more information, he has priced this collection at 425 euros without shipping. The third one from the left looks early (18th c.?) to me. It appears to be a useful mix of board and spine polishers. They even come with provenance! I purchased a collection of frottoirs and graittors from him which I will detail next week. 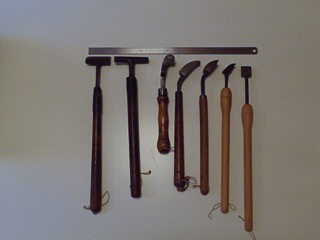 Jan describes these irons, from left to right:
# 1 & #2 come from the studio of Renatus De Cock, bookbinder in Mechelen (a town between Brussels & Antwerp). he ran his studio for half a century starting in 1938.
#3 I bought on the antique market in Tongeren. The vendor didn’t have any details about it.
#4 & #5 come from the studio of August Kulche. He was born in Tilburg (Holland) in 1927 and moved with his parents to Brussels. He studied in Brussels till 1946 and moved to Paris to become a bookbinder/ gilder. He returned to Brussels in 1953 and ran his studio there till 1960.
Then he worked with his father, selling machines for iron and wood workers, but continued creating fine bindings and teaching bookbinding and gilding. He still lives in Brussels, Square Marie – Louisa 57, 1040 Brussels.
#6 & #7 come from the studio of the binder Janssens, who had his studio in Halle, a little town south of Brussels. This binder stopped working early 2000. We bought his studio, which than consisted of half the studio of his father. Father Janssens (sorry I do not have the first names of either father or son) bisected (?) his studio between his son and his daughter. The son continued bookbinding but hired gilders for the top work, the daughter (Jaqueline) became a very skilled & succesful edge gilder. 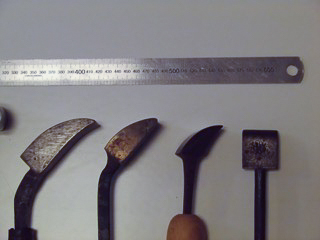