Earlier this summer, I spent a couple of throughly enjoyable weeks in the Netherlands, teaching two workshops through the auspices of Restauratoren Nederland, at the beautiful bindery of Wytze Fopma in Friesland. First there was a 3-day sharpening/ spokeshave modification class, a wadlopen and tour of Mennonite sites, then a 5-day 18th c. French binding class. It was all very, very good.

Each time I teach, I keep adding current research. I’ve taught versions of the sharpening class over thirty times, and the French at least a dozen. It sounds cliche, but I do learn something new each time.

This class, Constant Lem, book conservator at Koninklijke Bibliotheek, convinced me of the importance of the 180 degree shoulder that the French bindings often have.  I’d considered and worked on this, however working together we made progress on this historically unique(?) structural feature.

Before the workshop, I visited Ben Elbel, of Elbel Libro, in Amsterdam. He has a large studio, is doing some very nice work, and has a board beveling machine that I plan to steal at some point. Ben gave me a nifty steel folder which he sells. It is a nice size for detailed work, fitting comfortably in the hand, well made, and is also useful for blind lines. It comes in an attractive die cut storage folder. Metal folders keep popping up every now and then in the history of bookbinding: the earliest I’ve seen was patented in 1889.

Below are images from the workshop.

One of the most important aspects in freehand sharpening involves looking at reflections and scratch patterns in the blade, in order to understand what you are doing and what needs to be done. The visual feedback lets you know how to alter your hand pressure or technique. The scratches don’t lie.

The Big Board is a learning tool I use in the French class to keep track of questions, deviations from historic practice, instructor mistakes, material differences, etc.  Whoever has the most observations wins a prize, in this case a small lifting knife. Often there are over 150 observations. This helps keep us aware of inaccuracies generalized from our modern craft training that can creep into the historic style we are trying to understand.

As invasive treatments continue to become more infrequent in book conservation, the type of knowledge gained from making historic models will help keep book conservators relevant (I hope!), by increasing our knowledge of how these books were originally made.  Conservation as interpretation?

Not only did we have a custom made beating hammer, but we borrowed an anvil from the Blacksmith. A wonderfully solid substitute for a beating stone!

Wytze has the most massive operational standing press I’ve ever seen. He mentioned that it is the largest in Holland. He is operating the worm drive. Once the center screw is tightened as much as possible, to generate even more pressure, the drive can crank the main press screw another turn or so. The drive can be easily disengaged to quickly raise or lower the press. As a demonstration, he pressed some of our textblock paper so hard it sunk into the MDF pressing boards, creating a clamshell. It had little to do with the class, but was too impressive not to mention.

On the left is an 18th century skull the Wytze found, the finished books, an 18th century (?) French (Dutch?) beating hammer on the right, and in the back, the printed handouts for the workshop bound en-broche by Wytze and Herre. We started with the same tan calfskin; the color variations on the finished books resulted from varying applications of glair, paste wash, and warm burnishing. These are powerful and inert ways to control the color and surface sheen of leather without dyeing.

The skull and beating hammer literally and symbolically bookend this workshop: we were working with the head and the hand, using theory and praxis, to learn more about the nature of 18th c. French binding.

#1, a grattoir. I made this one based on an image in Diderot’s Encyclopedie. I think it should be all iron.

#2, a grattoir. I made this based on an image in Dudin’s Relieur. Traditional ones are iron and wood.

#3, a frottoir. Wood handle with iron. It resembles a fishtail chisel in profile and is similar to the older form of #2.

#6, a froittoir. I  based this one on models similar to #4 and #5 above. I use brass because I don’t want to risk rusting paper. It can be purchased in my shop.

#7, a froittoir. Looks vaguely German to me. It is very light. Generally, a German style frottoir is much thicker, and used perpendicularly to the spine-folds, rather than parallel, so I’m still searching for information about this one.

#8, a froittoir. Looks to mid-20th century to me, and is in clean, working condition. A great story accompanied this one via Jan Camps.   J and J Camps.  Jan relates that it was from the workshop Mr. Volkaerts, from Mechelen (a town in Flanders between Brussels and Antwerp). He studied bookbinding in La Cambre in Brussels. He got married, and for some reason his wife forbade him to start his own studio, instead he spent his whole life working a day job as a government official. In his spare time he bound books and managed to form a huge collection of gilding tools. After his death, his wife sold the books, stored away his machines and his collection of gilding tools. After she her heirs sold these boxes to Jan.

#9, a froittoir. Similar to #8 but older, much heavier, and much more comfortable to use. This could also be of German origin, Peter Verheyen mentioned to me it is called a called a Cachiereisen/ Cachier-Eisen /Kaschiereisen/Kaschier-Eisen.

#10, a froittoir. Old wood, wonderfully heavy and a great patina. This shape is very interesting to me, especially the offset “foot”. I would like to see how it is traditionally used.

#11, a froittoir. Heavy wood and beautiful curve. The presence on paint or stain on both #10 and #11 suggest they might have been used for leather marbling or edge sprinkling.

#13, a froittoir. I wondered if a smaller wood one could work as well as a iron one. It doesn’t. Based on a shape found in Dudin’s Relieur, though I think the original was iron.

#14, a froittoir. Currently sold by TALAS. I find it useless because the ends are too rounded and the handle is too straight to comfortably hold, and the pores in the wood absorb too much paste. However, a similar one is pictured in Edith Diehl’s 1946 Bookbinding: Its Background and Technique, p. 142.

Note: I acquired numbers 3, 4, 5, 7, 9, 10, 11 from J and J Camps in 2016. According to him, they originally belonged to Renatus De Cock, a binder in Mechelen. A biography of De Cock, in Dutch, but with pictures is here (http://www.boekbinderij-camps.be/content/files/111-229-engramzine-r-de-cock-af0cc7.pdf). De Cock studied bookbinding and gilding in Brussels at “Institut des Arts et Métiers de la Ville de Bruxelles”, his teacher was Louis Malcorps. De Cock bought some old workshops when he was a student and in the beginning of his career, the frottoirs/grattoirs where part of these workshops and likely date from around 1900 or earlier. 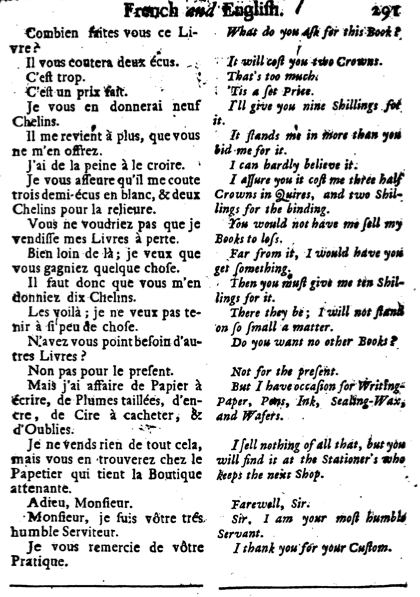 There are two particularly interesting phrases in this text.  “Will you have them bound in sheeps, calves or Turkey leather” indicates that the bookseller was selling unbound sheets or books in a temporary binding. “This binding is not good.” suggests the purchaser was considering the purchase of a bound book. Together they seem to indicate there was not a set standard regarding the purchase of books bound or in sheets in early eighteenth century France. There is also a clear distinction between the items for sale by the stationer— paper, pens, etc.—and bookseller.