What is going on here?   Why are these statues displayed in front of large industrial machinery?  What does it mean to display art in a factory, along with machines and tools? Is this merely a dramatic juxtaposition or are there deeper connections to be made?    Is this an example of bringing art to the masses?  Or is this a set for an unrealized Star Trek episode?

Pictured above is the Montemartini Thermoelectric Power Plant, located in Rome, Italy. In 1997, due to renovation at a number of the museums on the Capitoline Museums (Museo del Palasso dei Conservatori, Museuo Nuovo, Braccio Nuovo) many Roman artifacts were relocated to a then defunct power station that was built in 1912.  The temporary exhibition, originally titled The Machines and the Gods, proved to be so popular, the power station was made a permanent part of the Museum system and today houses many of its recent acquisitions.

Upon entering the building, the viewer is immediately plunged into sensory confusion– two fastidiously cleaned steam turbines (each roughly 25 meters long and 10 meters high)  are flanked by rows of Roman busts and sculptures.  A 20-Ton crane hangs over fragments of a Pediment from 179 BC.  Statues in the engine room keep a quiet watch on the non-functioning machinery.  The smell of the oil and grease permeates the air, so strongly, in fact as to give the viewer pause when gazing upon these white marble statures–as if one’s eyes alone could stain their surface.  Usually statues like these are encountered in lofty remove–the neutral white cube of museum space, reconstructed archaeological sites or in the pages of art books– here they are visiting us in perhaps the most prosaic of environments, a factory.

And the fact that the viewer is in a factory is never far from consciousness. It would not be out of place to expect to punch a timeclock when entering this museum.  But the time clock would not be for the visitors, but for these sculptures, forced to eternally  monitor these  machines, like a scene from an unwritten science fiction fairy tale.  Factories force us to think of time– of the assembly line, of mechanization, of time motion studies–while these statues embody the classic ideals of timelessness in art.

The silence in this factory is startling– there is no clanking of wrenches, no hissing of an air compressor, no humming of a motor —  just silence and stillness. Their massive presence and smell are the  only reminders of the billions and billions of kilowatts of electricity once generated here. The silence of this factory, of these quiet machines pairs remarkably well with the statues frozen in an often incomprehensible gesture.  Both are in some senses defunct.  The machines are no longer in operation, and the names and gestures associated with the statues are unknown to most modern viewers.  They are enshrined in this space, silent witnesses in this odd time capsule.

The statues and the machinery interact in unpredictable ways.  The parade of white, sometime armless, legless torsos against a backdrop of black machinery presents an interlocking dynamic that connects the crippled, nonfunctioning machines with the statues.  Are they are both deserving of sympathy, or even pity?  Or are these statues a factory owners vision of his workforce- mute, lifeless, headless in many cases, maimed– standing at eternal attention to the machines, yet not lifting a finger to do anything.   Perhaps these machines a concrete reminder that only when we are freed of our basic needs–such as energy– can we create art? Could these statues be regarded as ghosts of injured workers, condemed to constantly regard the place of their trauma?  Possibly the statues are warily watching the machines, puzzled by this 20th century behemoth. 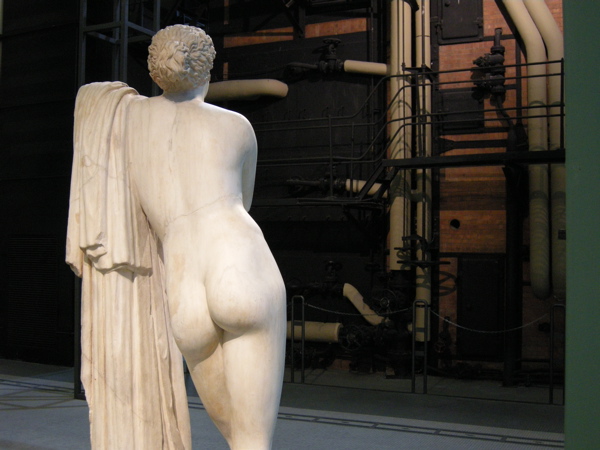 Juxtapositions abound in this museum, and relentlessly  overturn conventional distinctions of aesthetics and meaning– suddenly the polished cast bronze wheel of a high pressure pipeline seems as interesting and important as a delicately carved marble crown.  The white surfaces of the marble leap out against the black boilers.  The curves of a human body paired with the linear placement of hex head bolts.  These dirty monsters of work almost touch these Roman ideals of beauty.

Fundamentally, both the sculptures and the machines in the factory,  are expressions of power.  The sculptures reflect the power of an individual to command or pay for a statue that will outlive them.  The machines reflect the power of their makers to  extend, increase and transcend our physical limitations, as well as originally creating electrical energy from diesel and steam.  These massive machines are allegoric  to  the work of an artist who extracts the essentials from reality in the act of creation.  Power and transcendence– perhaps the two of the most basic ingredients of Art?

Below, I am taking a picture of a large head, with an  engine behind.  I am dwarfed by the power and size of the machine, and have to look up to the multitude of statues as well. Machines are de facto public expressions of power, rated  in non-human terms of horsepower, in this case 7,500 of them.  Most of the statues in this museum were originally on public display.  Electricity itself can be considered a primary expression of power by the state- consider the philosophy of those “living off the grid” or who are Amish. 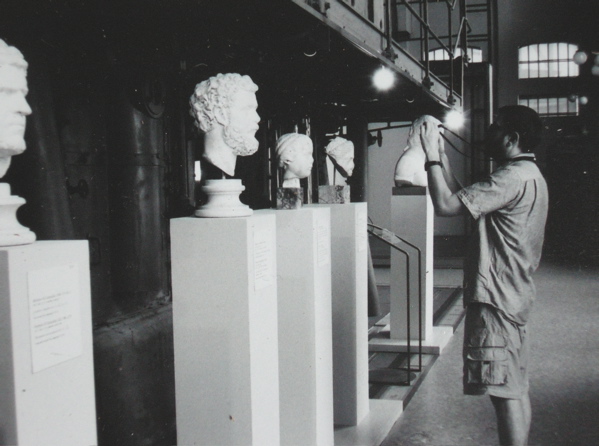 Visually, much of the joy of looking at tools or machines comes from trying to figure out how it works, or even more basically what the parts do, and how they fit into a whole.  (1) In some senses, the machines can be regarded as pure description– the parts essentially describe themselves and what they do– there is no narrative to explain them.  The statues, with their narrative symbolic meanings,  belong to the world of Art.  But in this context, as one views both of them together, they merge and overlap in intriguing ways.  A circle of bolts on a cylinder  possesses an unexpected harmony and grace.  Conversely, the clothing on the statues, detailed and realistic,  accurately describes the technology of the cloth and of clothing– the art moves a bit closer to our vernacular world, without diminishment, and the vernacular a bit closer to the realm of art.

And what could be more a product of vernacular culture than a tool?  Considering that they form a large percentage of extant artifacts from prehistory, it is surprisingly rare to see modern examples on display in museums. The tools in this museum are displayed as artifacts, impressive for their size and perhaps a reminder that it is the humans who have their hand on them, controlling and maintaining these collosal machines.  But they also belong to the past and are now entombed and only presenting their visual aspects. 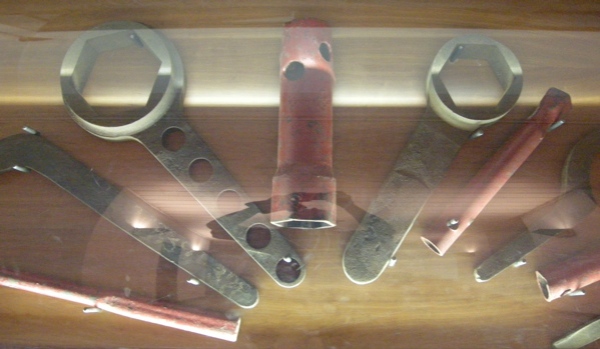 One of the freizes in the museum also depicts the tools of the carpenters Guild who constructed the roof on the Temple of Capitoline Jupiter in the 6th century.   I imagine the figures were originally  using tools, although the evidence is now lost. On the upper left of this image there is the most graceful outside caliper I have ever seen, an unidentified tool (or a stool?), a hammer (or axe?), and a bowsaw.   There is a very long history of workers wanting to be pictured with their tools, again, they give the workers power in shaping matter, and can become symbols of the power, skill and knowledge that craftsmen posses.

Another visual link between the sculptures and the machinery are the mounts and support rods (visible in the photo above  under this marble fragment) which are echoed in the walkways, banisters, connecting rods and pipes that surround the machines.  Typically, the job of museum mounters is to provide support and protection by being visually unobstrusive- here, however, they form a link between the sculptures and machines.  While the rods and bolts support the sculptures, they contain the machinery, keeping it from exploding when it was in operation.

Both the factory  and the museum lie somewhat outside “real” life.  We are forced to check our baggage and leave it locked securely before we enter.  And the symbolic implications are the same- we pass through the door (sometimes in factory work changing our cloths, assuming a new identity) lock up our possessions which are stored under lock and key, which we wil retrieve when we leave. We often pay, or are paid to enter these spaces. In each, as a viewer or worker, there are certain social conventions most of us follow. This factory/museum questions some of those assumptions.  To enter each is to enter into a contract to explore the potential challanges that the overall experience raises, then, regretably, leave it behind when we leave.

But I am unwilling to mentally leave this factory, just yet.  Thinking about it allows me to explore the differences and similarities  between factory/ museum, art/ artifact/ tools, artwork/ factory-work,– and  many , many other inspiring and provocative aspects.  The curators and designers have brought two previously isolated aspects of human culture together, the machines and the gods, and each reveals something about the other in new and unexpected ways.

1.  I speculated on some of the ways tools impart meaning, and how that meaning is difficult to interpret visually  in Conservation and Tools: An Enquiry into Nature and Meaning., published in The Bonefolder, Vol. 1 No. 1, 2004.

3 Replies to “Expressions of Power: Reflections on Centrale Montemartini”