There are two basic styles of leather paring knives used by bookbinders: an English style knife, with a straight blade positioned around 45 degrees to its length and a French or Swiss style knife with a curved blade positioned roughly 90 degrees to the length. I’ve combined some of the advantages of both of these styles into a new kind of knife — a straight Swiss knife.

For Swiss and French knife users, there are several advantages to a straight blade when compared to a rounded one. Straight blades are easier to sharpen and strop, can cut a straight line the width of the blade with a single downward slice (ie. for labels) and can be used for a final, smoothing cut to even out preliminary paring.  Current English knife users will appreciate some of the advantages of a Swiss style blade orientation. In use, the knife is very comfortable, since two fingers are used to push it, rather than relying just on the thumb.  An acute effective cutting angle is easy to attain, as illustrated below, because of the blade angle. Additionally, it is easy to pare in either direction, instead of flipping the  knife upside down and working on the bevel, which is more difficult to control.

The first pass when edge paring

The wedge shape of this knife is different than a standard Swiss shape, making it comfortable and easy to hold. The leather handle, located roughly at the midpoint of the knife, conforms to the natural shape of the hand when using the knife.  The width of the blade where is it held is 1.75 inches (45 mm) wide. The balance, shape, and weight of the knife give it a substantial presence in the hand.

In the image above, notice that my thumb and middle finger support the blade at the proper angle to the paring surface and pushes the knife forward. Notice that only one side of the blade is used and relatively small strips of leather removed at each pass.   Commonly three or four strips are pared off until the desired turn-in width and thickness is reached. It is very difficult to control cuts with the entire width of the blade unless you are using more of a smoothing cut pictured below, which is almost more of a scraping action — a bit like what a spokeshave does, except that your hands jig the blade.  For the spine area and general scraping, however, a rounded blade is still preferable, since only a small part of the blade is actually cutting at any one time. The relatively wide blade makes it easy to reduce the thickness of a corner with one sweeping slice, which helps make a neat corner.

A smoothing, finishing cut using entire width of the blade 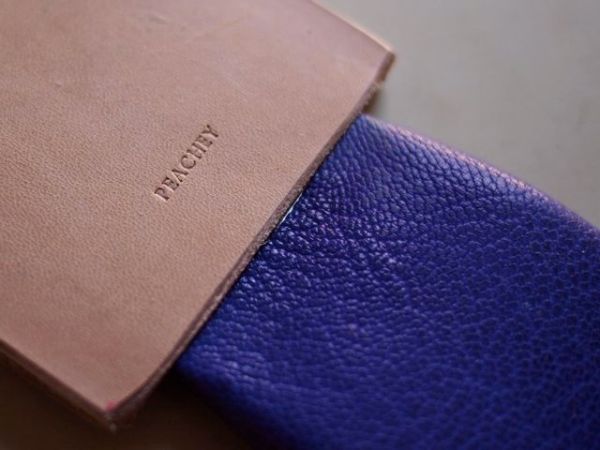 2 Replies to “The Straight Swiss Knife”